Supermoto. Or is it Supermotard? Or maybe just SM? Yes we agree, initially it might be a little confusing, but with some patience, hopefully it should become clearer after reading our notes below...

Supermoto really started in 1979 when ABC (in the USA) commissioned a TV event called "Superbikers," which was intended to find THE all-around motorcycle racer by putting riders from different genres of racing, onto a single track that combined three types of racing: Flat Track Racing, MotoX and Road Racing. Superbikers became very popular in the USA and ran until 1985 when ABC were forced to cancel the TV show due to management and budget changes. European racers who had taken part in Superbikers brought it back to Europe with them, where it quickly gained popularity, especially in Belgium, where the very popular and now historic status 'Superbiker' event (held every year at Mettet) was created. Its popularity also grew very quickly in France where the English name; 'Supermoto' quickly gained a French adaptation to become 'Supermotard'

The 2000's saw some really dramatic growth of the sport, both in the United States and Europe, with the birth of many exciting National Championships and inclusion within the X Games at Los Angeles. In Europe the European Supermotard Championship was the most popular series (see below for memories of the UK Event in 2003) but due to various political and financial reasons, this ceased whilst on top form

A Supermoto World Championship, run by a promotional team replaced the popular European Supermotard Championship, but the cost of Supermoto competition, especially at World Championship level, had already rocketed skywards... The Worldwide financial setbacks that started in 2008 simply added fuel to the fire. 2008 was probably the start of the demise of the sport in terms of its effectiveness, affordability and popularity. Many leading manufacturers withdrew their race teams and focused on producing Supermoto Road Bikes and in the USA, the sport was removed from the X-Games and the US National Championship became unimportant compared to previous years

Historically, many motorcycle racing stars from lots of other disciplines have tried Supermoto Racing - with mixed results! The years 2000 - 2008 were just before the powerful effect of Social Media became allied to modern digital technology, so most of Supermoto's halcyon days are only available on Standard Definition video clips (if you are lucky), Even so, you'll still be amazed at the riding skills on show on any video clips you see! As we have said elsewhere, Supermoto Racing could easily come back in again, so don't be a stranger... You could miss out!

The final image below is taken from an advance Press Release for the 2003 British Superprix at Lydden Hill, probably a zenith for all the International Supermoto events held in the UK. Times have changed, old records have now been replaced, but this was a seminal moment for Supermoto for many different and exciting reasons... Currently, there are many existing websites on which, you can read the full history of Supermoto Racing and all its offshoots, but here are links to the most popular starting points: 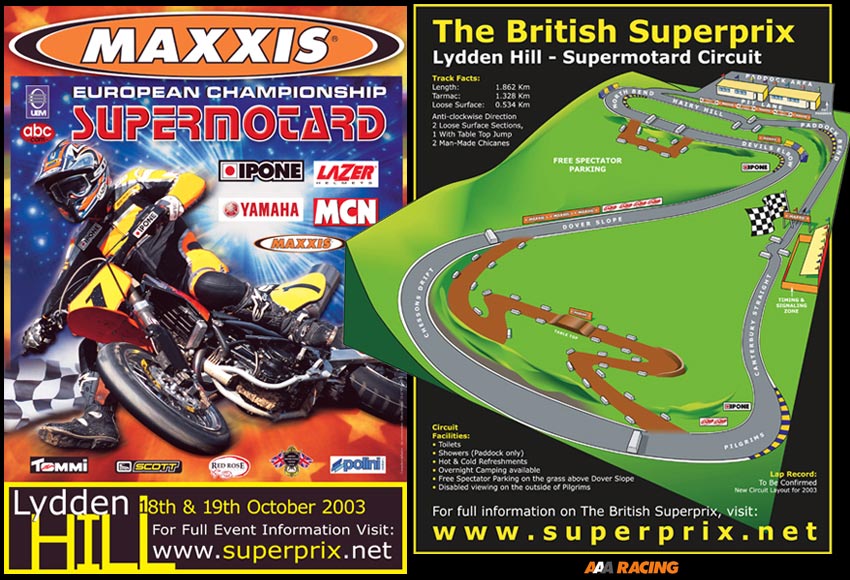